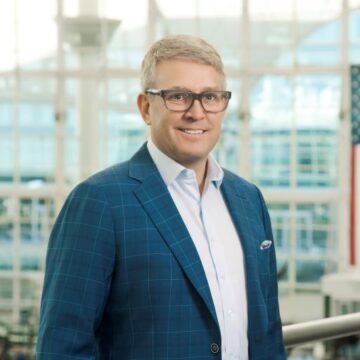 RK is recognized as one of Colorado’s top family-owned businesses. As well as one of the top private companies by revenue. RK currently employs around 1,400 people and operates four facilities spanning roughly 370,000 square feet and 40 acres in Denver, Henderson, Aurora and Salt Lake City in addition to several satellite offices.

Jon worked in the family business for several years before venturing into real estate. Prior to returning to RK, Jon worked as a Licensed Broker for CB Richard Ellis. In 1998, Jon established the commercial Service division for within RK and continues as President of RK Service. In addition to his role at RK, Jon also serves as Managing Partner for Kinning Holdings, a real estate holding company established in 2000. Jon is the President of the RK Foundation, which was founded in 2011 to support nonprofit and public causes within RK’s community.

Jon has a passion for education and workforce development that is demonstrated by his community involvement. He serves on the Metro Denver Chamber of Commerce Executive Committee, the Metropolitan State University of Denver Foundation Board and Emily Griffith Technical College. He is a founder and board member of the Green and Gold Foundation, an active member of the Colorado Chapter of the Young Presidents Organization, and on the Executive Committee for the Advisory Board for Alliance for Choice in Education (ACE Scholarships). He is also a Council Member for the Denver Public Schools CareerConnect program and is a graduate of Leadership Denver 2014.

He holds a BSBA with an emphasis in Finance and Real Estate from Colorado State University, an MBA from the University of Denver and is also USBGC LEED AP BD + C accredited.

Jon lives in Denver and Vail, Colorado and has two children. He enjoys spending time with his family as well as golfing, skiing, dirt biking, traveling and maintaining an active Colorado lifestyle. His family is supportive of his ice-hockey habit, but does not participate with him.

Your ticket for the: Jon Kinning